Five years ago, I was MSRNE Social Media Collective’s Ph.D. intern researching the ways in which people use video game engines to create physical comedy. To do so, I went through heaps of fascinating literature on humor, which I have drawn from many times since.  Upon my return to Prague’s Charles University in 2013, I teamed up with Tamah Sherman, my American-born and Prague-based sociolinguist colleague, and we started our shared “side project” – research on “Grammar Nazis”, language management and humor. Our first article on the topic is available here, and the second one, “I see your garbage”: Participatory practices and literacy privilege on “Grammar Nazi” Facebook pages in different sociolinguistic contexts, has just come out in New Media & Society. In this blog post, I will talk a bit about the background and the findings of our research.The expression “Grammar Nazi” was first used as an insult against people who needlessly scold others for grammatical errors, most likely in the discussion forums of the early 1990s. However, over the years some online communities have embraced this moniker and started to ironically affiliate with it. By that time, and especially in online vernacular, the word “nazi” had lost some of its WWII connotations and started to signify anybody who held strong beliefs and required others to follow them (like the “soup nazi” from the eponymous Seinfeld episode). In social media, various groups started to entertain themselves by collecting and commenting on grammar mistakes. Spotting grammatical errors and poking fun at them has been and still is a part of online folklore – the online environment making the process convenient thanks to the high volume of available material and the possibility to copy, paste and share.

So, while online communication has made it easier to subvert linguistic norms, it has also enabled activities that are conservative towards language. Social media have become a proving ground for linguistic innovation, but also a site of struggle to maintain the “standard language”. Sociolinguistics has repeatedly shown that a “standard language” is a social construct, and there is nothing given or natural about it in itself. However, many users hurry to its defense, pointing out mistakes in other people’s writing; they are “policing” language use, to use the expression of Jan Blommaert et al.  This policing is often done in a humorous way, and therefore considered harmless, funny and acceptable.

As we were starting research for the current article, in July 2014, “Weird Al” Yankovic, a popular U.S.-based musician and parodist, released the song “Word Crimes”, an adaptation of Robin Thicke’s pop/soul hit “Blurred Lines”. In the song, Yankovic, a self-proclaimed “grammar nerd”, makes fun of people who use English grammar incorrectly, especially online. The lyrics start with Yankovic singing: “If you can’t write in the proper way / If you don’t know how to conjugate / Maybe you flunked that class / And maybe now you find / That people mock you online”. He then goes on to pinpoint several examples of language use that tend to be perceived as wrong: “You should know when / It’s “less” or it’s “fewer” / Like people who were / Never raised in a sewer”.

The song successfully utilizes incongruity-based humor by covering the original song (which has been criticized as misogynistic and sexist) with completely unrelated, seemingly harmless lyrics which poke fun at “incorrect” language use. It went became immensely “spreadable”, gaining over 37 million views on YouTube; some critics described his parody as “clever” and “spot-on”.

But not everybody was as delighted. As linguist Lauren Squires, among others, put it in a blog post: “many linguists are shaking their heads and feeling a little hopeless about what the public enthusiasm about it represents: a society where largely trivial, largely arbitrary standards of linguistic correctness are heavily privileged, and people feel justified in degrading and attacking those who don’t do things the ‘correct’ way”. In her view, such criticisms only disadvantage some groups of speakers, who do not have privileged access to education or other means of cultural capital. This has been tied to other discussions about “literacy privilege”,  or the social inequality between those who possess certain kinds of literacy, especially the ones learnt in the school system.

In our research, we focused on Facebook pages that explicitly affiliated themselves with the Grammar Nazi label, both in English and in the Czech language. We expected differences between the two, as English is a lingua franca for much of the Western world, and the language has no single standard-setting institution, whereas Czech is a language with about 10 million speakers, most of whom are citizens of the Czech Republic. Additionally, the Czech Republic has a centralized institution that maintains linguistic norms through the production of dictionaries, grammar handbooks, orthography and style guides and a language consulting service. We had two main research questions: 1. Which kinds of grammatical errors attract the attention of admins and fans of Grammar Nazi Facebook pages? And 2. What is the nature of their policing and how do they understand their activity? To answer these, we used a mix of qualitative and quantitative methods.

Regarding the first question, we found that both in Czech and in English, the self-proclaimed Grammar Nazis mostly hunt for spelling mistakes. There are many more aspects of language – morphology, syntax, style and so on, but about 70% of all mistakes identified by Grammar Nazis are “crimes” against orthography. Quite often, these are errors stereotypically connected to formal education levels or intelligence in general – such as mistaking “their” for “they’re” in English. This hints at the interpretation that much of the Grammar Nazi activity is – in Bourdieu’s terms  – an expression of distinction between those who know proper spelling and those who don’t, in other words, literacy privilege.

Regarding “how”, much of the policing is done in a humorous way. Grammatical errors highlight the arbitrariness of natural languages and invite people to engage in wordplay and incongruity-based humor (such as seen on the example of “pure bread husky”). 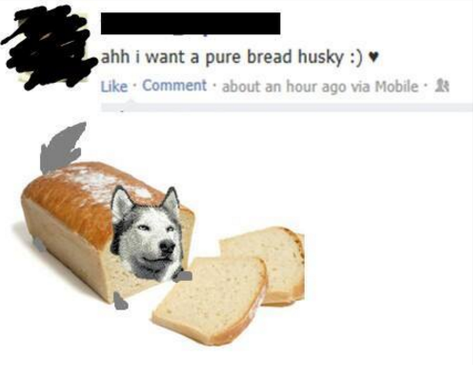 However, another substantial stream of humor is based on superiority – laughing at the expense of somebody else. When people are making fun of a grammatical error, they are also implicitly or explicitly making fun of the person who committed it. And our material suggests that these are often less privileged members of the society, such as service industry workers, women or immigrants. This hints at a darker side of the Grammar Nazi-related entertainment.

We also found significant differences between the adoption of the Grammar Nazi label in the English and Czech contexts, relating to the different sociolinguistic situation of each. Our English page was very much connected to the online culture, memes and the irreverent – and often confrontational – message board culture. Here, the literacy privilege manifests as the privilege of the clever joker who can ridicule and put down others in conversation. Much of the content posted there had been taken or adapted from another online sources.

On the other hand, the Czech group adapted to label to engage with very local kind of error spotting and language policing. Here, most images were photos of errors that occurred in local, offline contexts – on public signs, in shops and restaurants, or in commercial news media. Here, the literacy privilege enables users to act like vigilantes and guardians of the local public space. Overall, although some “Grammar Nazi” sympathizers claim that they are “helpers of the Internet”, they rarely educate others, but rather display their own knowledge of standard language in comparison to others, articulating distinction among groups of people based on presumed linguistic competence.

During the review process for the article, one of the reviewers asked us to elaborate on the problematic use of Nazi imagery and the connected metaphors, a reasonable request especially in the current sociopolitical climate. In our material, the pages’ administrators and users use these either with exaggerated ironic detachment or not at all. What we find more problematic is the belief that standard language is a superior, non-negotiable set of rules that one can be “Nazi” about – which is, ultimately, an idea that linguists have been trying to debunk since at least the 1960s.

You can read the full article here.

Images have been collected from Facebook public pages and anonymized.

One thought on ““Grammar Nazis” and literacy privilege”